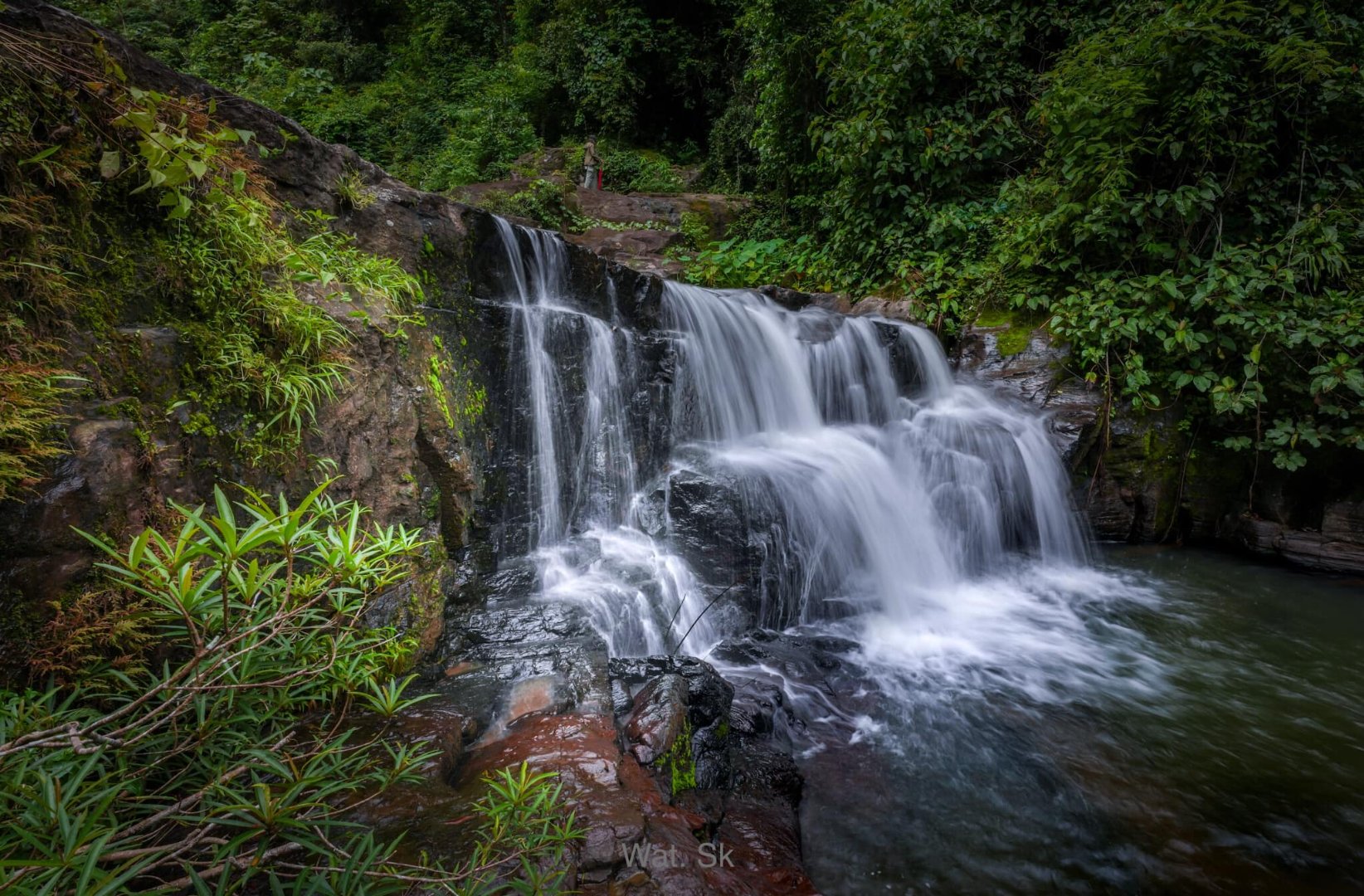 "Nature took hundreds of millions of years to create Khao Yai National Park through various geological processes of both deposition and erosion, balanced in an endless cycle."

The topography of Khao Yai National Park is a complex of mountains formed from volcanic and sedimentary rocks eroded by water. Internal rock fractures caused by fault lines, along with natural cracks and fissures, accelerated the erosion, developing small fissures into water channels and eventually river beds. Powerful watercourses changing with the seasons eroded rocks on the river banks to make tall, sheer cliffs, and on their way down, created waterfalls. As they hit against the harder rock, the course of the water became twisted, while eroding cracks and fissures, until only the durable rocks remained as rapids. 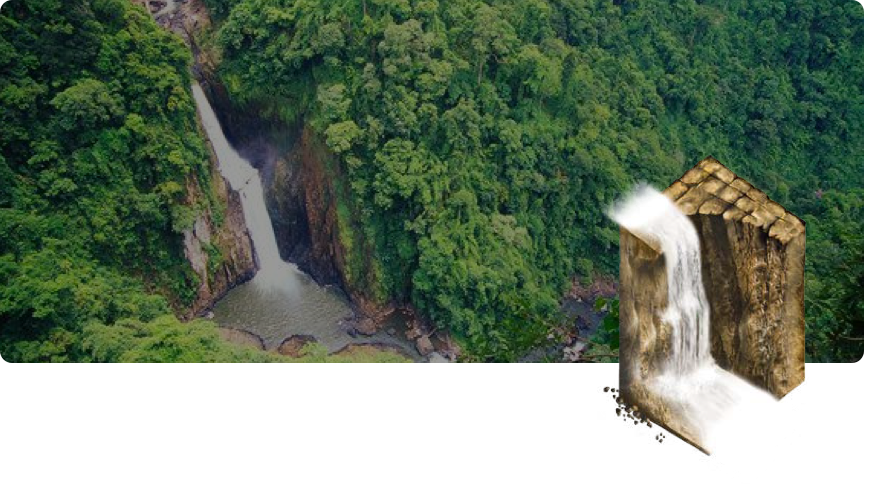 The extreme 100-metre height of Haew Narok Waterfall is a testament to the power of water eating away at rock for millions of years. The result is a 90° cliff which has claimed the life of many wild elephants, giving it the name, "Valley of Hell" (Haew Narok)

Haew Narok Waterfall is located to the south of Khao Yai National Park. The area was made of pyroclastic rock below and sedimentary rock, Korat rock, above. At the start of the Paleogene, an upswelling gave birth to the Korat Plateau, making cracks, fissures and fault lines in the rock, making it vulnerable to erosion. Rain and the Klong Tha Dan channel eroded the sedimentary Korat rocks until they fractured, became loose and fell down following the water; deep abrasion formed the steep cliffs of Haew Narok Waterfall. It started further ahead than it is now, and water worked on the stone over time to make it retreat towards the water source. Broken rock fell into the deep chasms below, giving the waterfall its current magical appearance of receding cliffs. 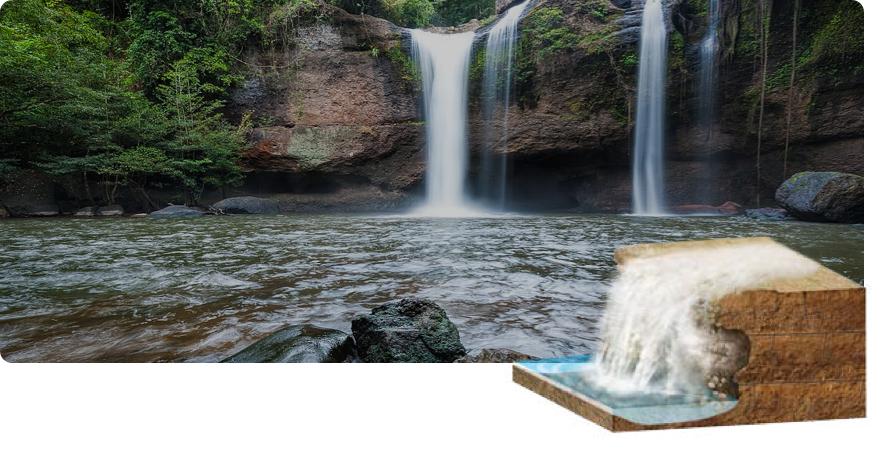 From hot volcanic lava to a magnificent waterfall

The scenery of Haew Suwat Waterfall is the prominent view of water falling from overhanging rock into a wide gorge that is deep and concave, like a long curtain of flowing water. The thundering water has eroded it with eddies into a deep pool to the south, shady, cool and moist. It's hard to believe that this was a hot volcano millions of years ago.

The rocks of Haew Suwat Waterfall are like those of Haew Narok with sedimentary Korat rocks on top of volcanic rocks, but implacable erosion year after year has worn down the limestone to reveal the volcanic bedrock below. As well as erosion from the water itself, the meandering watercourse has brought shards of rock, gravel and sand downstream to erode the cliff underneath the waterfall into a deep cavity. Over time, the cliff above became thin and brittle, breaking off to make the waterfall retreat towards its source, leaving the current Haew Suwat Waterfall. It is remarkable that the sharp volcanic gravel found at Haew Suwat has been sorted into different sizes by gravity to result in graded bedding. After the volcanic eruption, heavier rocks fell to the ground first, followed by the smaller and lighter ones. This occurred frequently until the lava cooled into the angular gravel pebbles, graded by size from coarse- to fine-grained as we see today.

Patterns from hot lava in the cool, peaceful forest

After volcanic eruptions millions of years ago, viscous lava flowed from the volcano’s crater in all directions, burning everything in its path with temperatures of thousands of degrees. The viscosity of the molten rock left surprisingly delicate patterns as it cooled, as if from an artist's brush. However, it was Nature who created this priceless artistic masterpiece for human viewing pleasure.

Pha Kluay Mai Waterfall developed in much the same way as Haew Suwat Waterfall, differing only in that volcanic pebbles are replaced with Rhyolite showing flow bands of lava. Water erosion along the crevices, fissures and lines of lava flow have created a beautiful landscape of cliffs, waterfall, islets and rapids, convoluted rock pools and streams, capturing moisture for the surrounding vegetation. These attract flocks of forest butterflies who drink the minerals among the sedimentary deposits and stone crags. 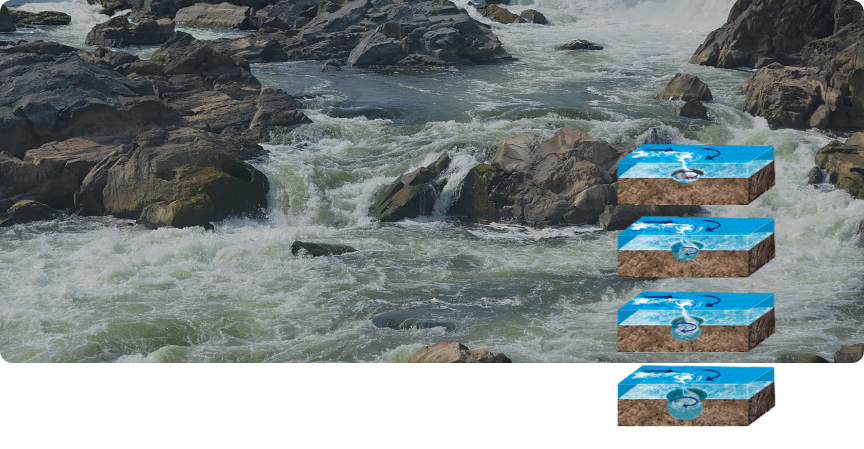 Sculpture of water on rock bed

Kaeng Hin Phoeng Rapids are witness to the creative power of water modelling a wide and indented rock bed. In some places there are potholes, and in others, humpback bridges and small waterfalls. These wonders make speculation about how long nature kept this beautiful place hidden from human eyes in the forests of Khao Yai.

This famous whitewater rafting location on the River Sai Yai is the result of eroding thick sandstone along fissures and the bedding plane. A large group of rocks stand in the middle of the water. The narrow water channel gives rise to powerful currents during the rainy season, scouring and breaking rocks, or flows sluggishly in a meandering path over islands and rocks during the Hot Season in a never-ending cycle. Kaeng Hin Phoeng Rapids are on coarse and large sandstone blocks from uneven deposition in an east-west line, with a small dip to the south blocking the north-south flow from the Sai Yai River. Inside the rock, cracks and fissures receive seasonal water flow, with pieces of rock breaking off and scouring deep crevices to change the gradient and water level. Some parts of the stream form small waterfalls which are very pretty, while the remaining energy transports abrasive gravel in whirlpools, cutting into the hard rock to make many deep potholes to be seen on the surfaces of islets and rocks and the riverbed in the dry season. Cross bedding is evidence of the water's former direction, revealed as prominent stone shelves on the rocks.

Map of the mountains' history

Travelling to Khao Yai from Pak Chong, the road twists and turns, going up and down through the forest until the 30 km milepost. It is the first viewpoint where tourists can stop to appreciate the majestic mountains to the north of Khao Yai National Park. The viewpoint looks north, revealing the vertical topography like a relief map modelling the mountains, valleys, waterways and plains. It also shows the shapes of different types and ages of rock, and human structures.

The furthest visible mountains appear as cliffs, tall, steep and indented. Some areas appear as brown cliffs with caves. These are the mountains of Khao Phaeng Ma, Khao Pha Jaeng, Khao Wang Hin and Khao Tham Din, limestone mountains dating from the Permian Era (299-251 MYA). Mountains run into each other right up to the viewpoint, a range of volcanoes from the Permo-Triassic. 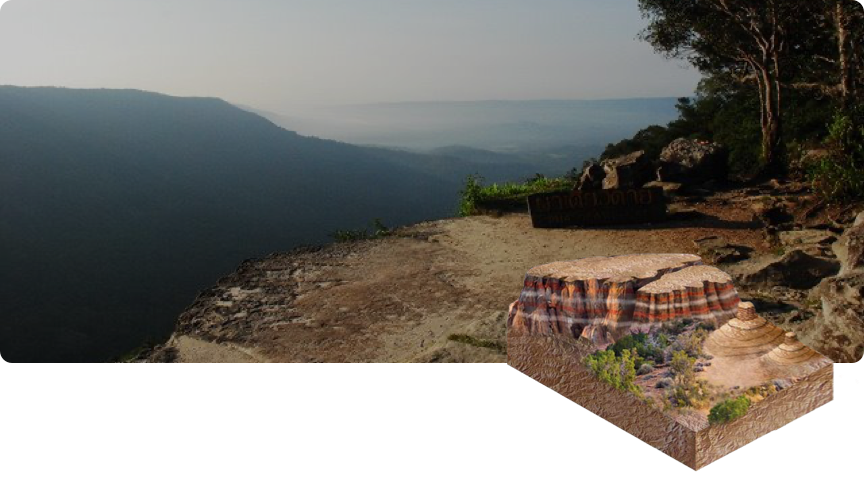 The broadest perspective from the center of the forest

The highest viewpoint with the furthest views in Khao Yai National Park, this place gives a perspective on nature, mountainous forms from the erosion of water. It gives a new understanding about the geology of the forest.

Mountain building and subsequent erosion over geological eons has sculpted the stone platform on a cliff called Pha Diew Dai. The rocks are a Phra Wihan formation, which contain white and light brown sand grains of a similar size. The thick rock layers show cross bedding, clear evidence of watercourses changing direction in the past. Water erosion has gone deep into the cliff slope, taking away the supporting rock, and leaving only the 1-metre thick platform jutting out over the thickly forested valley below. It's difficult to measure the depth of the erosion process turning sandstone into white grains of sand, taking them into the cycle of sedimentation, to become a rooting spot for many forest trees to grow. Such growth has created the beauty and charm of this lonely (“Diew Dai”) cliff.