Khao Yai National Park has the tourist resources for many activities popular among both Thais and foreigners. Tourist attractions are divided into waterfalls, viewpoints, reservoirs and observation towers. 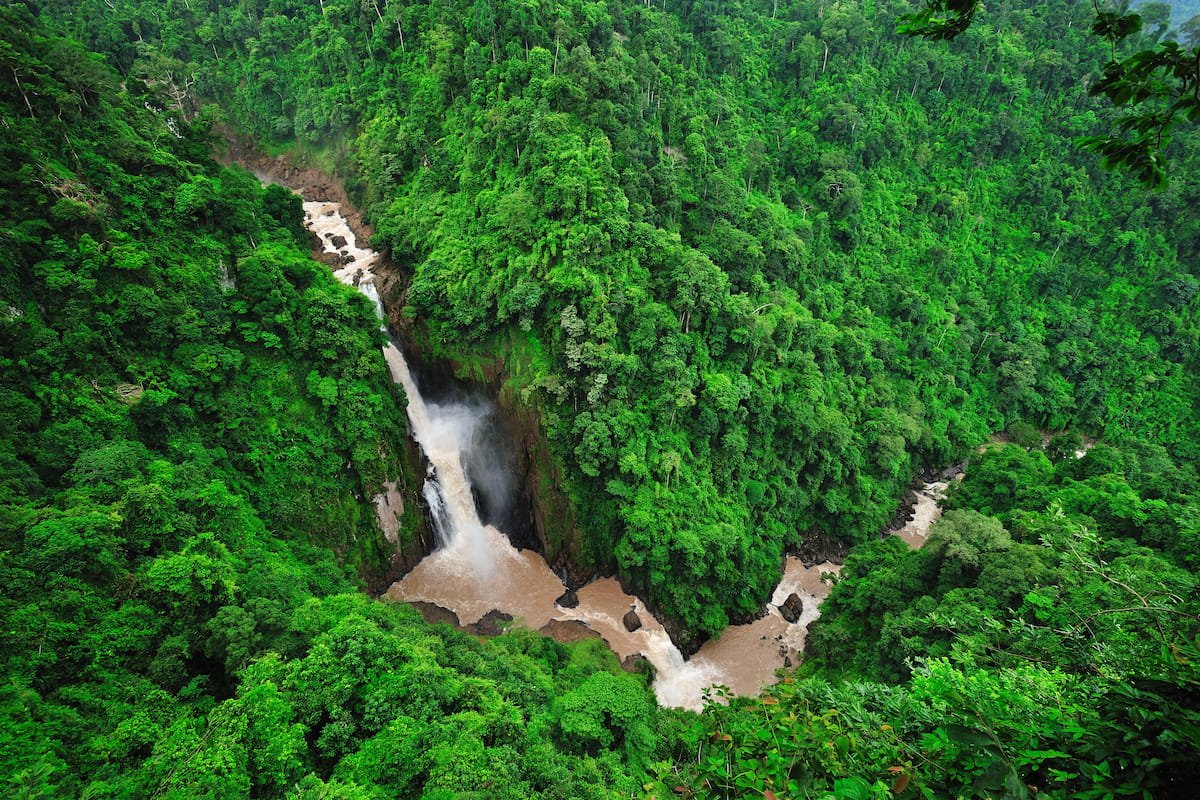 Haew Narok Waterfall is well known for being a beautiful place containing hidden dangers, because of its steepness and the strong currents. Haew Narok is located to the South of Khao Yai National Park and is its largest and tallest waterfall. It is 150 metres high and falls in three tiers. At the highest stage, the cliff is perpendicular and the water falls with some force, which is dangerous for swimming.

It is exceptionally beautiful at the end of the rainy season, and you will see champagne mushrooms along the path to the waterfall, so called because they are shaped like champagne glasses and come in bright colours of red, orange and yellow, attracting visitors from far and wide.

The area of the waterfall is a permanent part of wild elephants’ foraging range, which has been the cause of tragedy with elephants falling down the waterfall. The first time was on 2 August 1992, when a family of 8 elephants was lost as they crossed the stream in the forest at the top of Haew Narok Waterfall, making it known as an “elephant graveyard.” On 5 October 2019, another 11 elephants were lost.

Located on Highway 3077 at the 23-km milepost, that is, 23 km from the Visitor Center. There is a 1-kilometre walk from the car park which goes over Huay Samor Poon Stream to get to the waterfall viewpoint. There is abundant nature on both sides of the path. Once at the waterfall, there is another staircase descending 50 metres which is both steep and narrow, but it gives an unparalleled view of the beautiful waterfall. 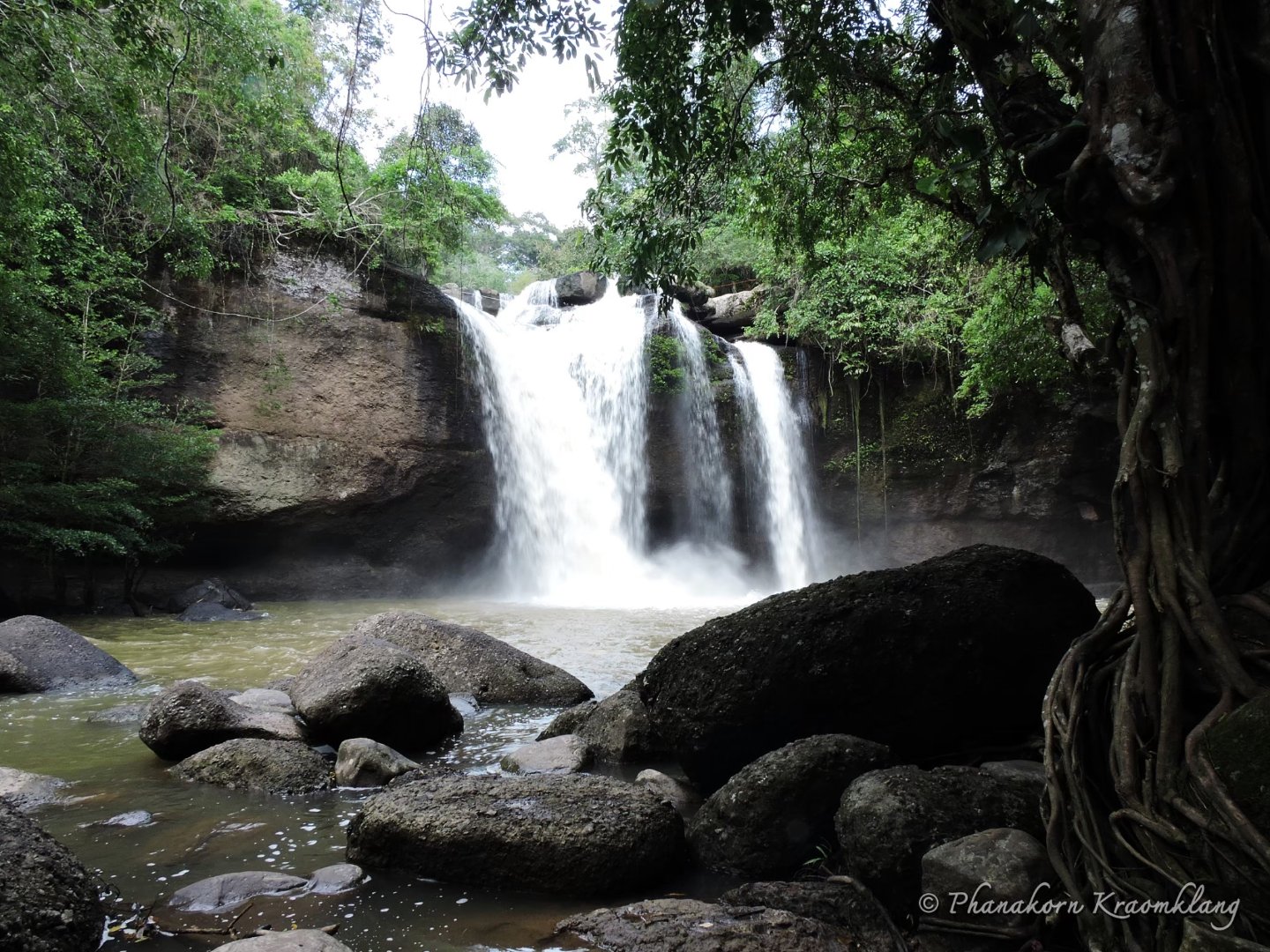 Haew Suwat Waterfall is quite large at 25 metres tall. It comes from volcanic rock which has the special attribute of “volcanic gravel”. It is part of the Lam Ta Khong stream as the other waterfalls Pha Kluai Mai and Kong Kaew, and as it falls, it forms a beautiful curtain of water.

Below the waterfall are trees with high resistance to waterlogging and the choppy waters - willow-leaved water croton, Glochidion, epiphytes of the genus Ficus, Ficus squamosa and Rhynchotechum.

Behind the waterfall is a cave. In the dry season when water levels are low the cave can be seen, and visitors can see the curtain of water from inside the cave. However, during the rainy season, the current is very strong and visitors should be aware that this is dangerous. 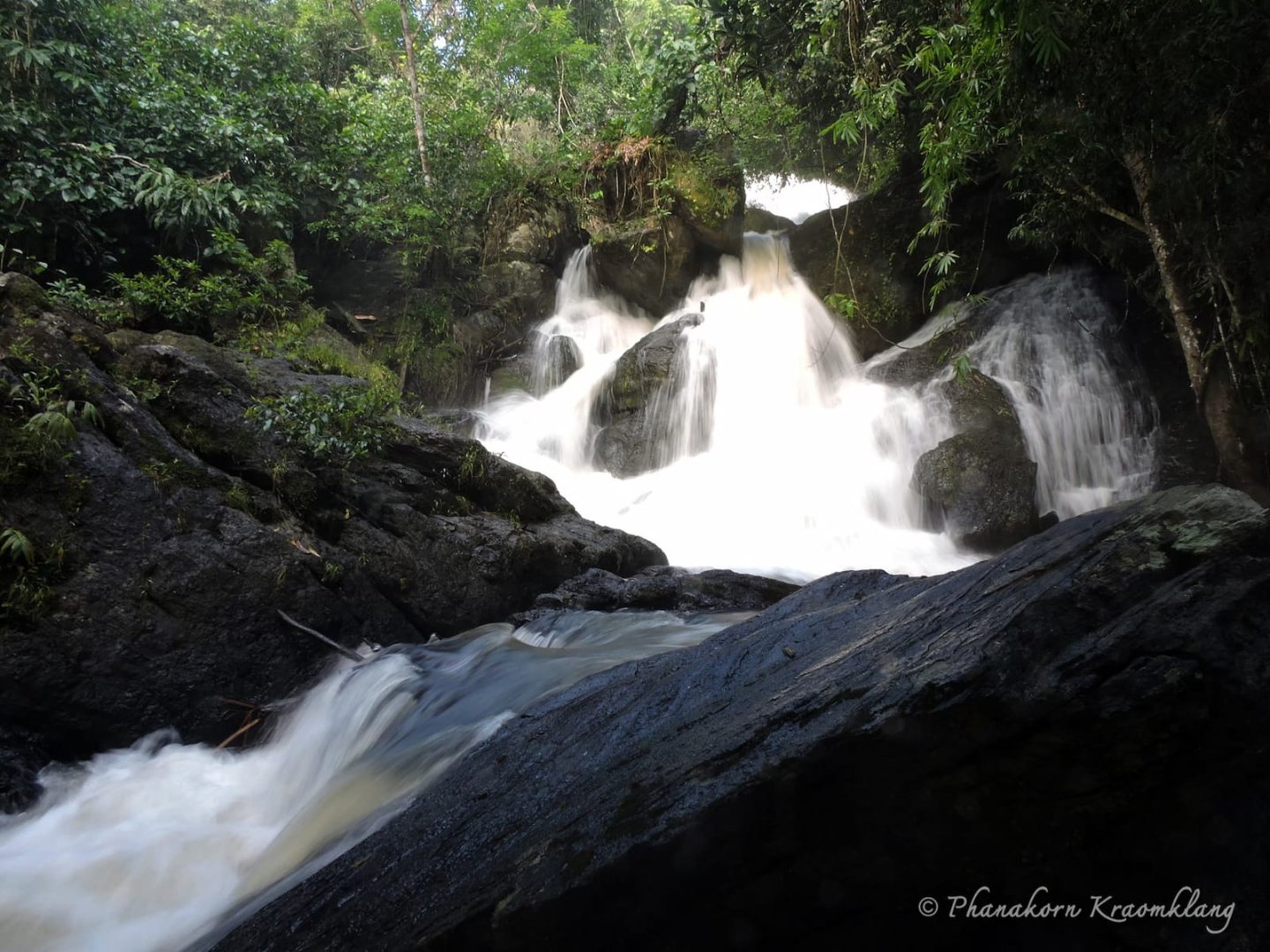 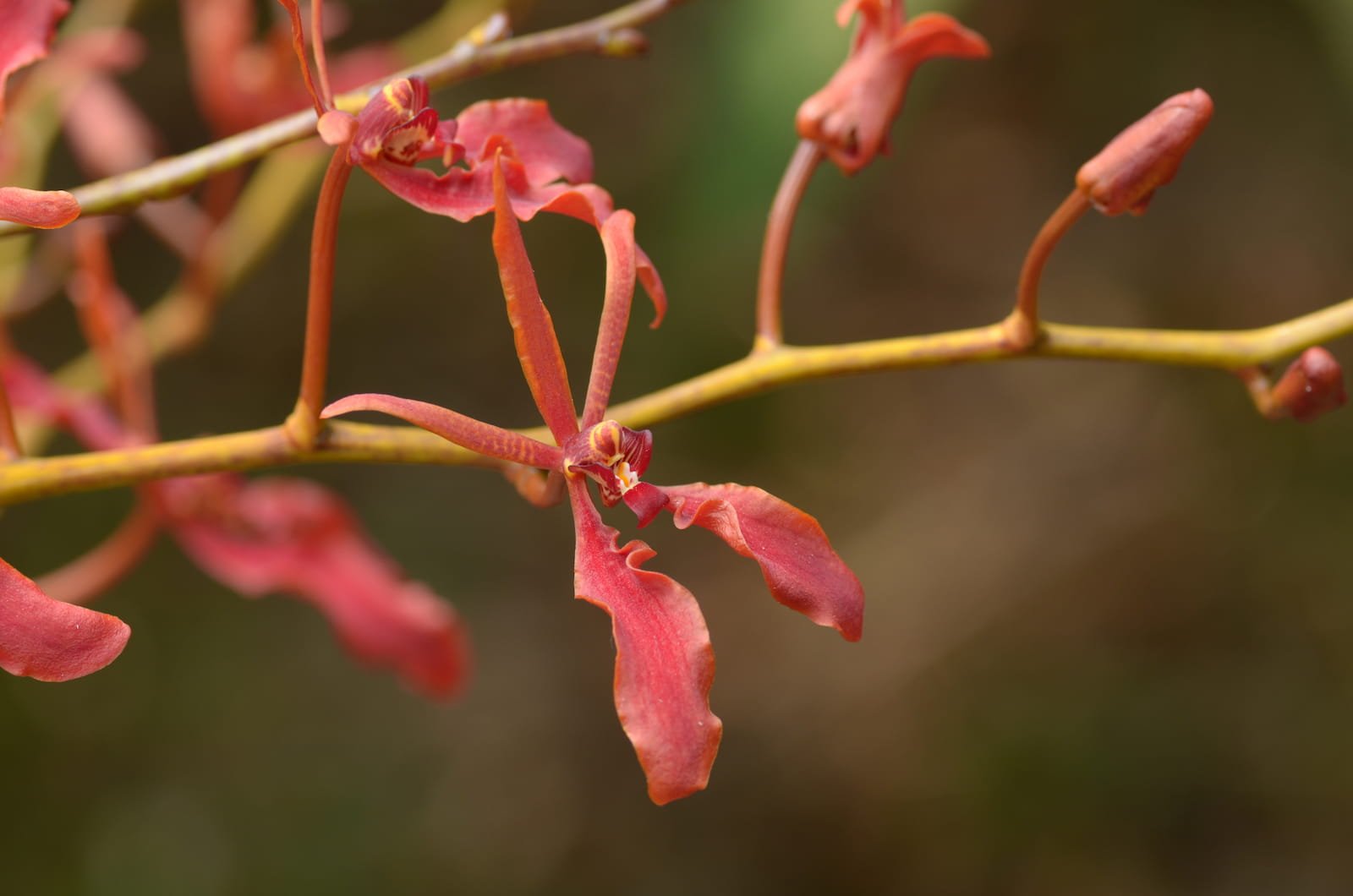 This is a medium-sized waterfall with its headwaters in the Lam Ta Khong stream, which flows over steep cliffs. It is about 10 metres tall, with water collecting in a wide basin below.

On the cliffs and the tree boughs around the waterfall is a dazzling array of orchids in many different colours, and particularly Renanthera (“Whai Daeng”), which give the waterfall its name. They are in full bloom in the dry season. On the walk up to the waterfall, you might see many kinds of birds including hornbills, slaty-backed forktail, puff-throated bulbul, or water dragons basking by the side of the Lam Ta Khong stream.

Pha Kluai Mai Waterfall is located about 7 km from the Visitor Center. Access is by car or on foot. The start point is about 1 km from Pha Kluai Mai Campground. The path runs along Lam Ta Khong stream and is shaded by large trees. 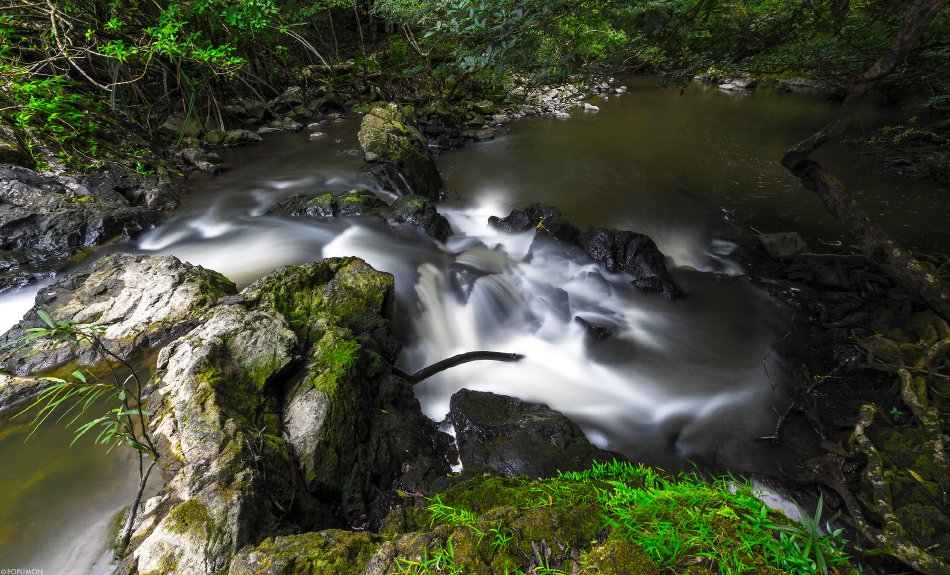 This small waterfall rises from the Lam Ta Khong stream which marks the border between Nakhon Nayok and Nakhon Ratchasima. In the rainy season, it is exceptionally beautiful. Near the waterfall is a rope bridge crossing the stream, which has a very relaxing atmosphere.

By foot, starting about 100 meters from Khao Yai Visitor Center 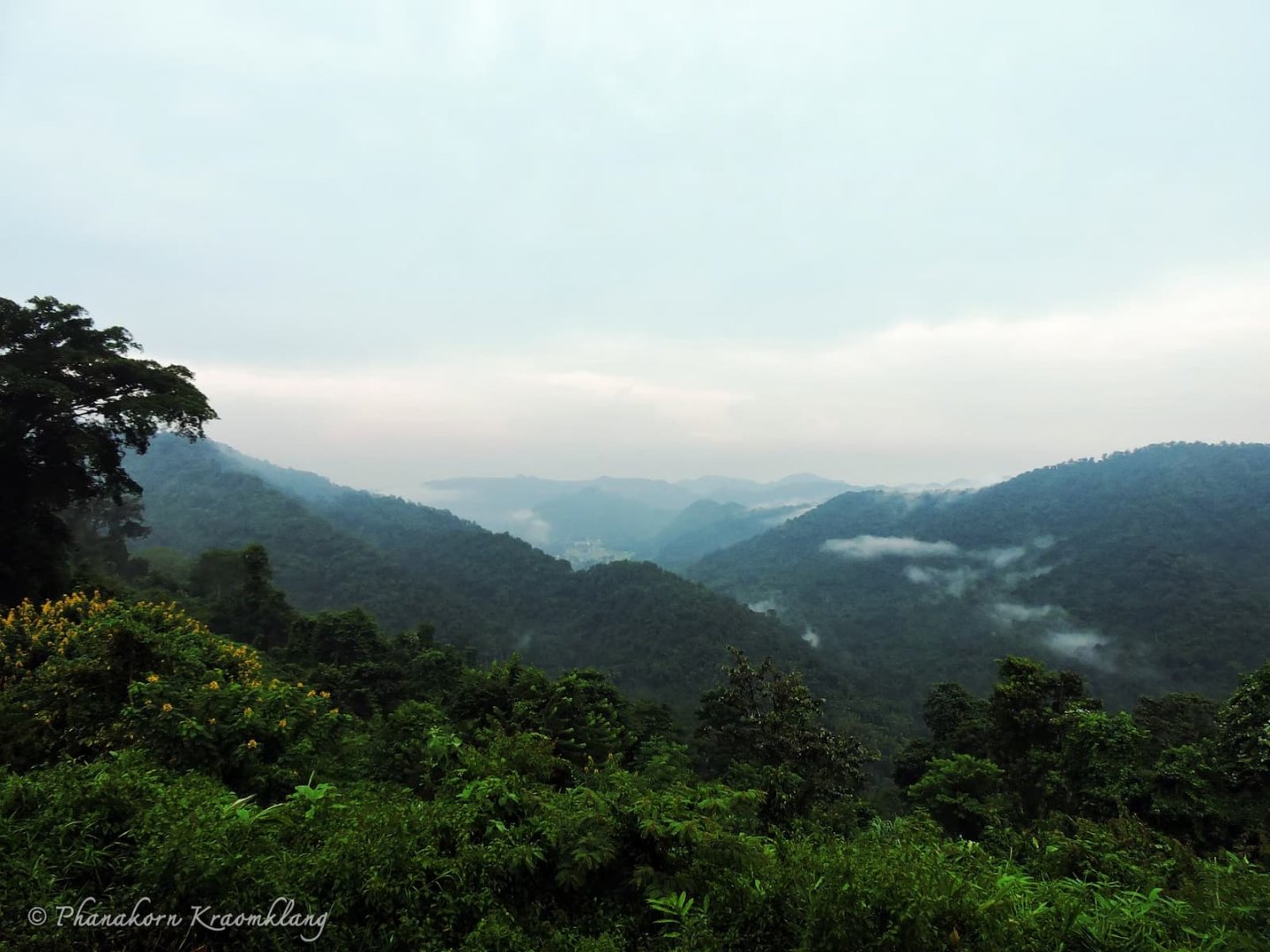 This is the first viewpoint encountered when entering Khao Yai National Park from Pak Chong in Nakhon Ratchasima. The view is to the north, and one of the most stunning in Khao Yai. Early in the morning there is a sea of mist below the interlocking mountain range. At twilight you may see clouds of bats flying out of caves on Luk Chang Mountain to forage for food. The closest mountain you can see is Khao Phaeng Pha, many tens of kilometres distant. In Addition, there is a stone sign with the logo of the World Heritage site, an unmissable check-in point. 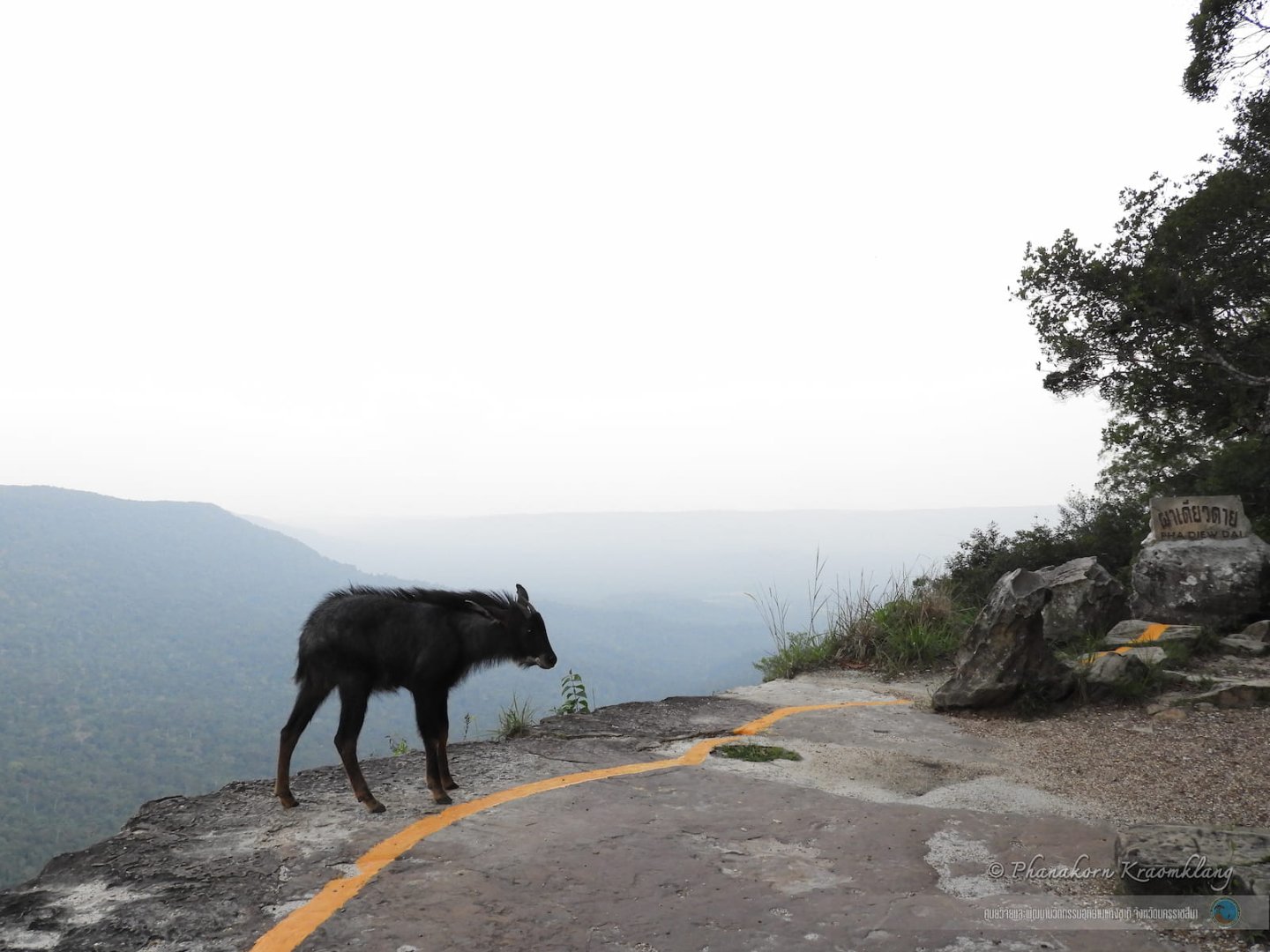 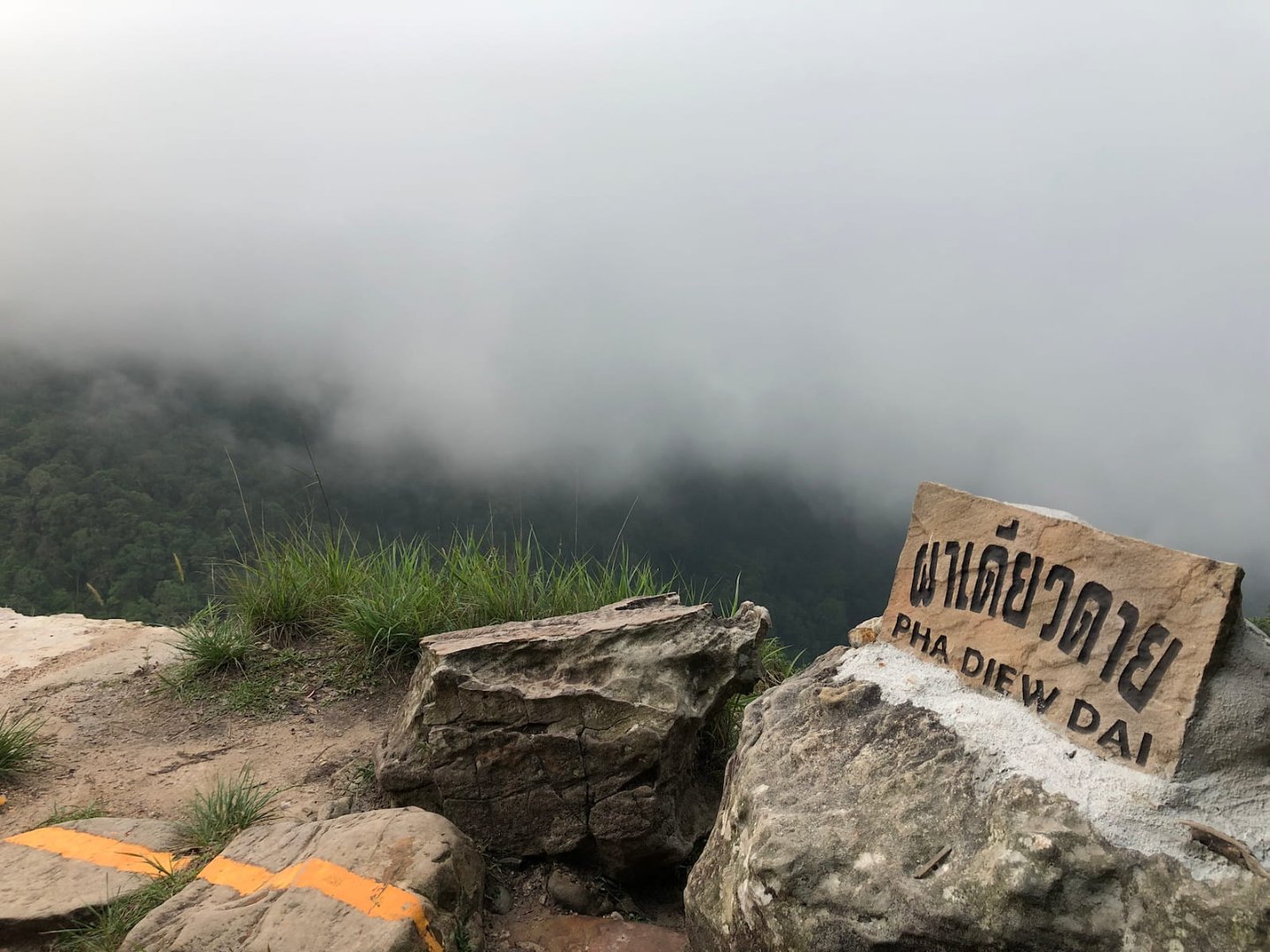 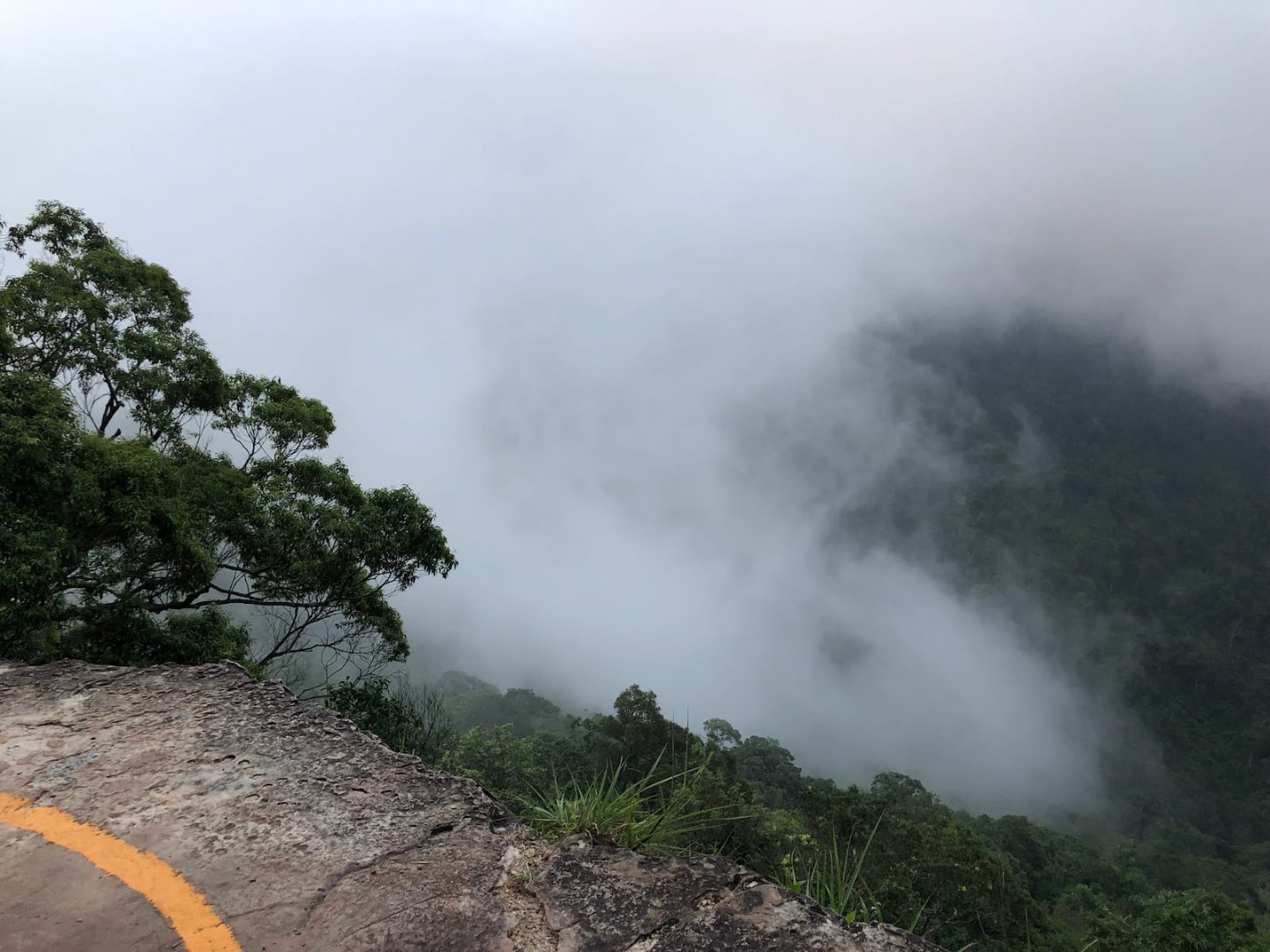 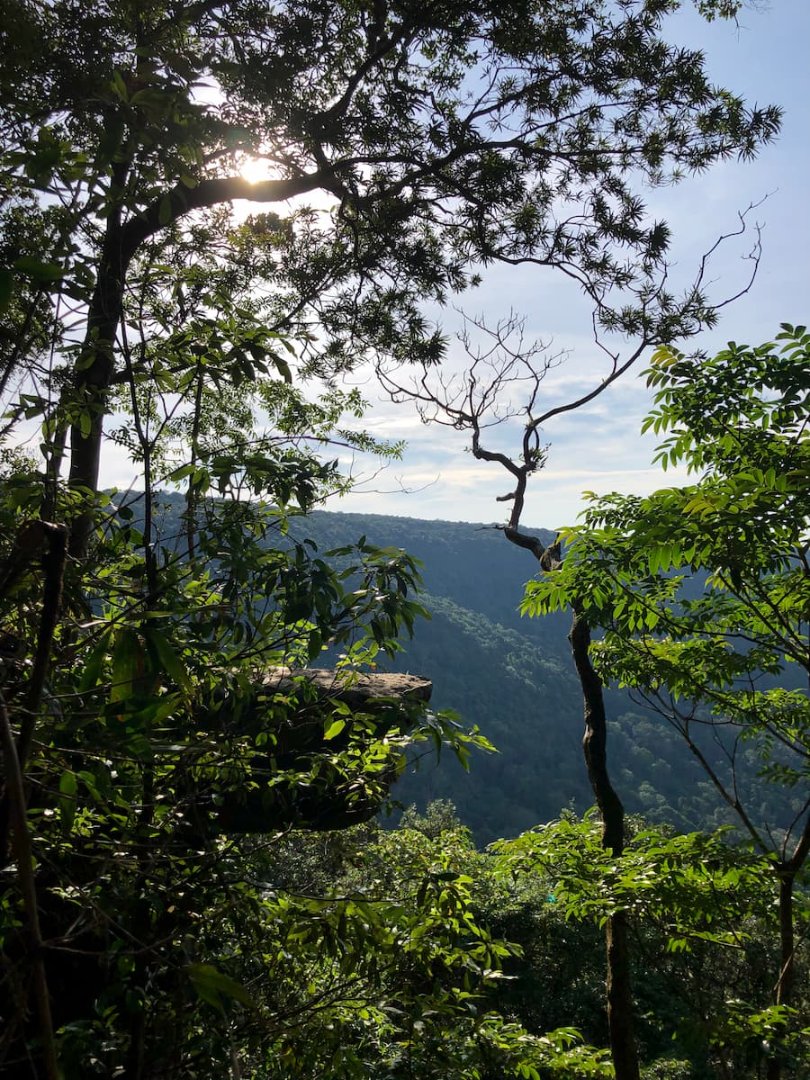 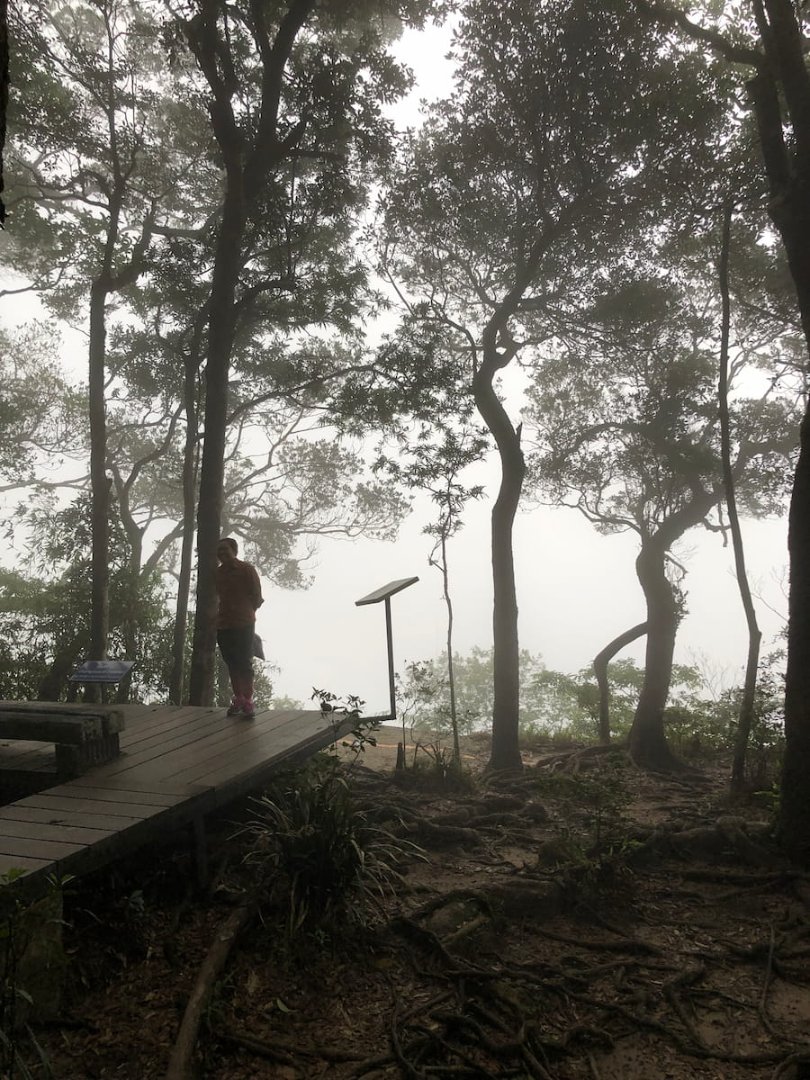 This viewpoint is beautiful. It is a stone platform protruding from the Cliff about 15 meters, at an elevation of about 900 meters above mean sea level. The view from the cliff is the long Rom Khwang mountain range. On the right is Thung Nguluam, a mountain named after its pythons, and the mountain of Khao Samor Poon, which you can see past to the plains of Prachinburi Province. It is a wonderful place to catch the sunrise in the early morning as it peeks above the mountains.

Getting there requires hiking a nature trail which goes through pristine forest which gives moisture and coolness all year. The trail is approximately 450 meters long and is quite convenient to walk as it is surfaced with wood. The start point and end point are close to each other. The trail is also a source of knowledge about montane ecosystems of high altitude plants which are adapted to cold. 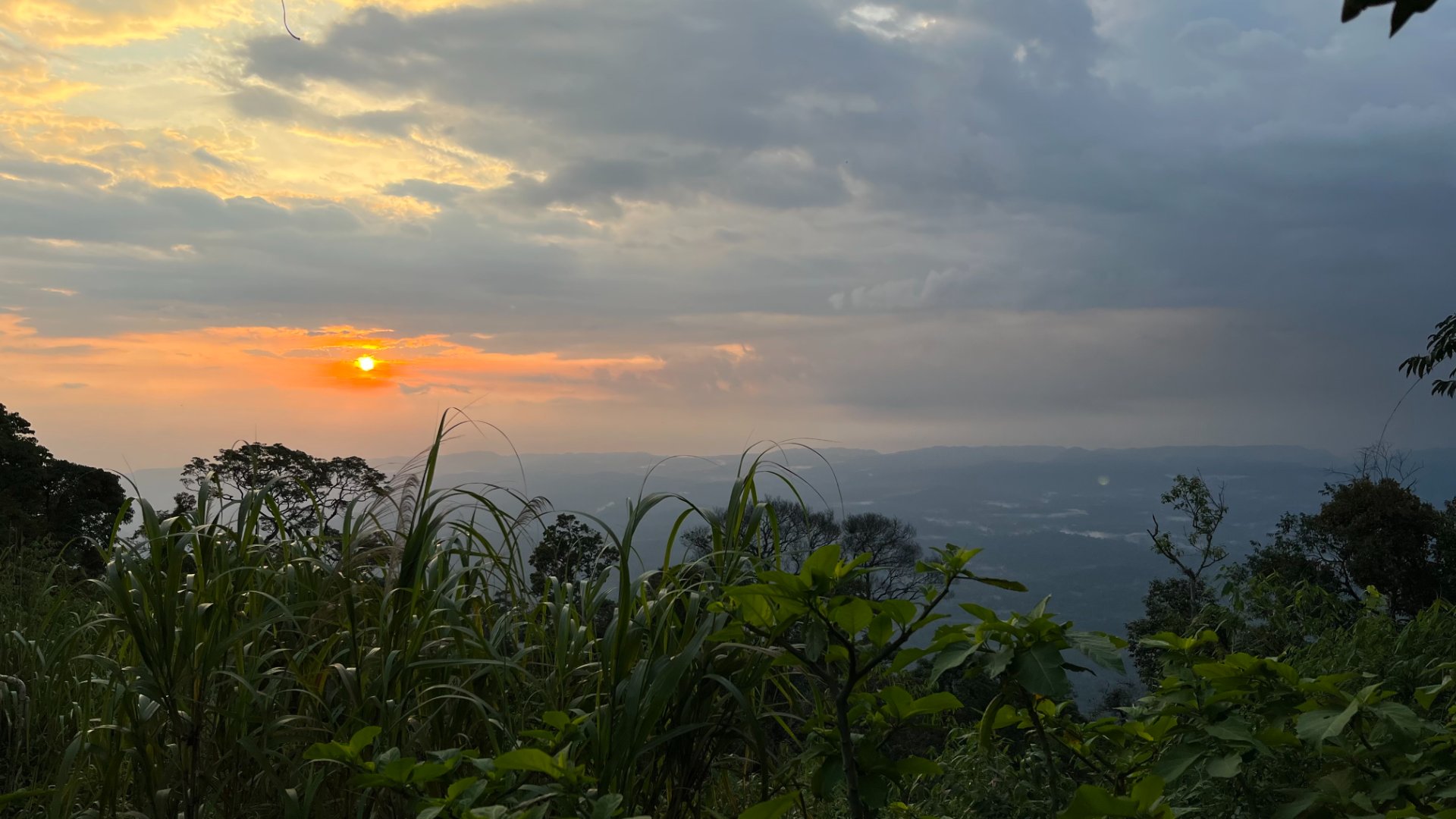 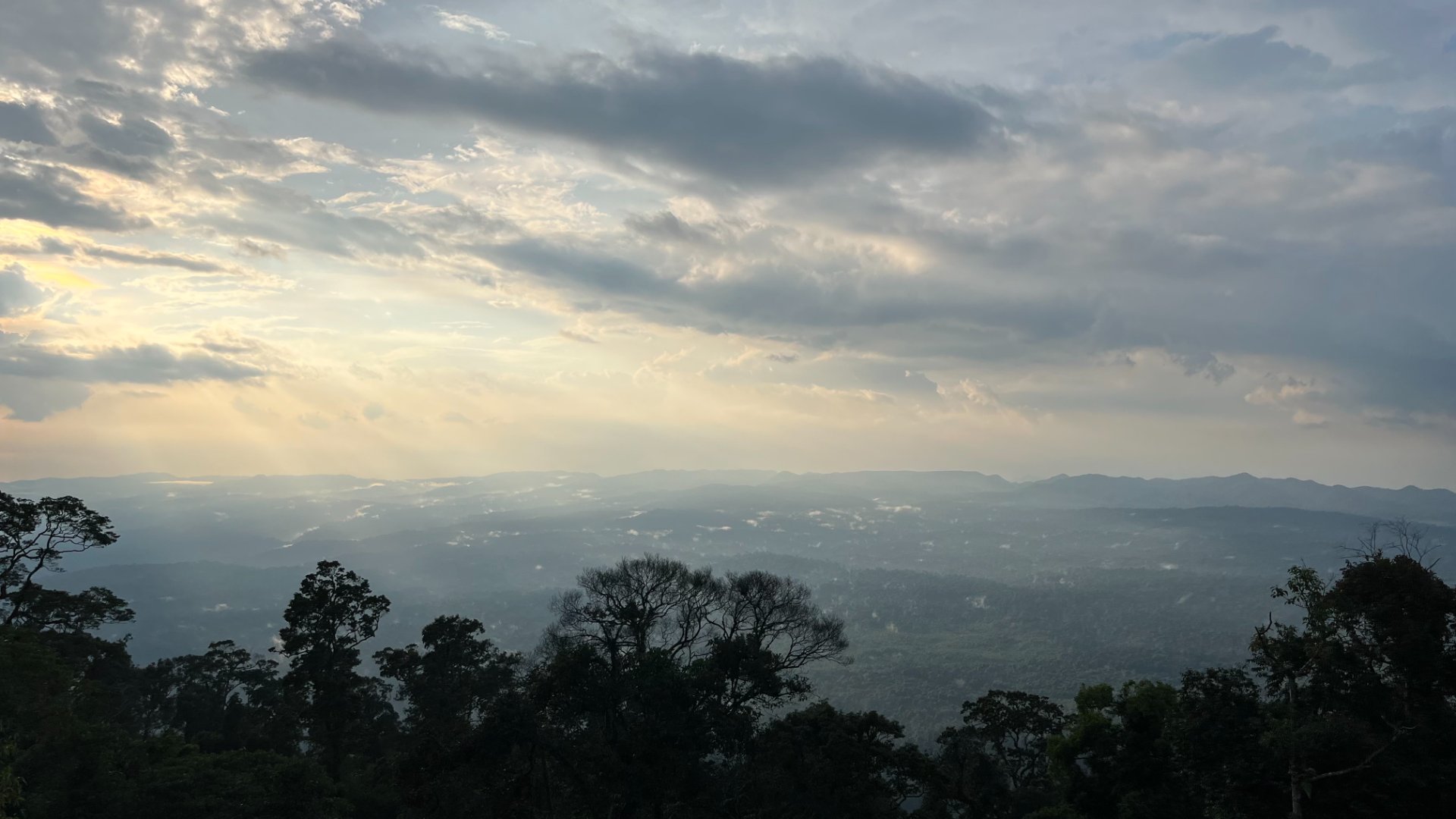 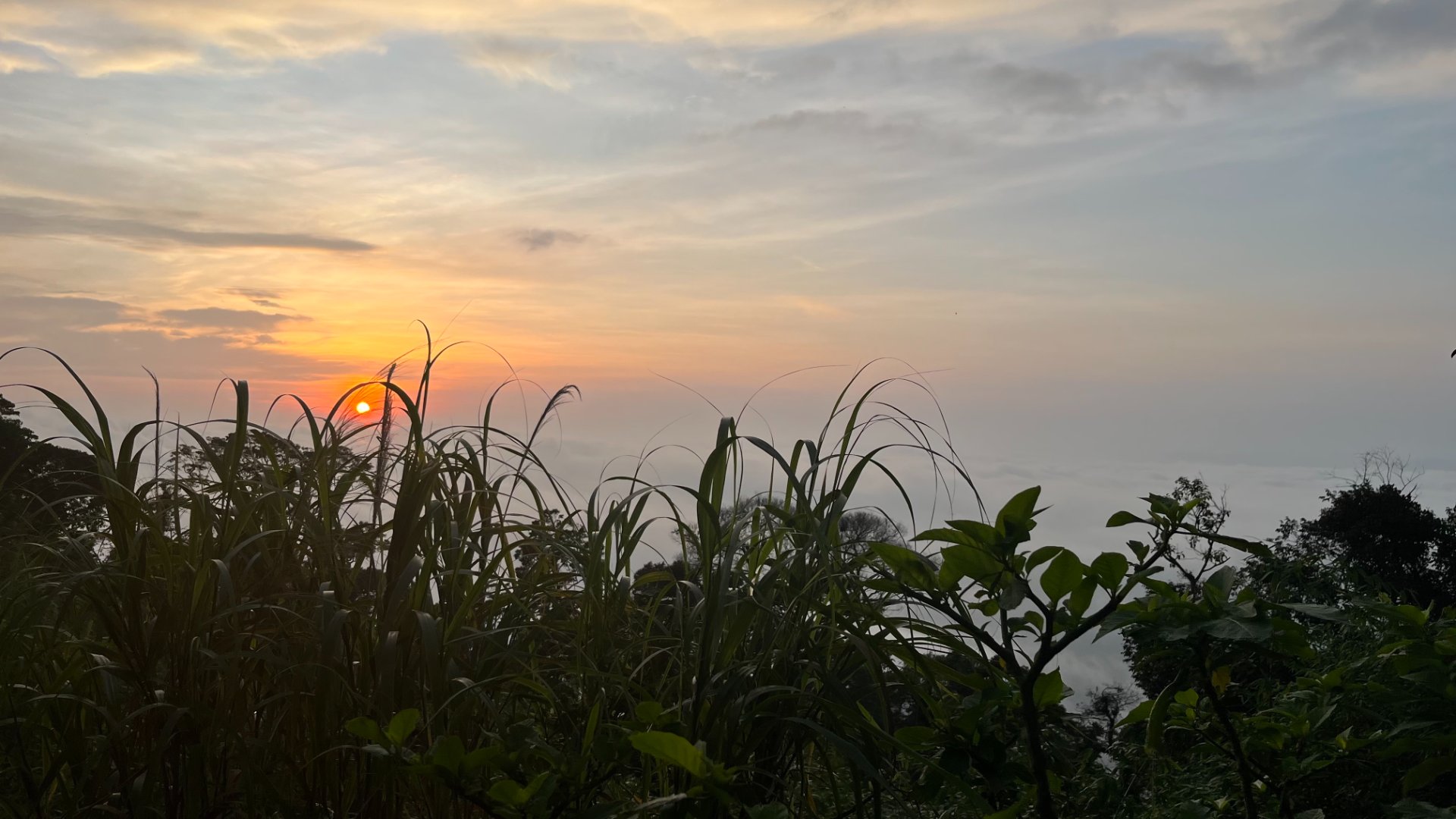 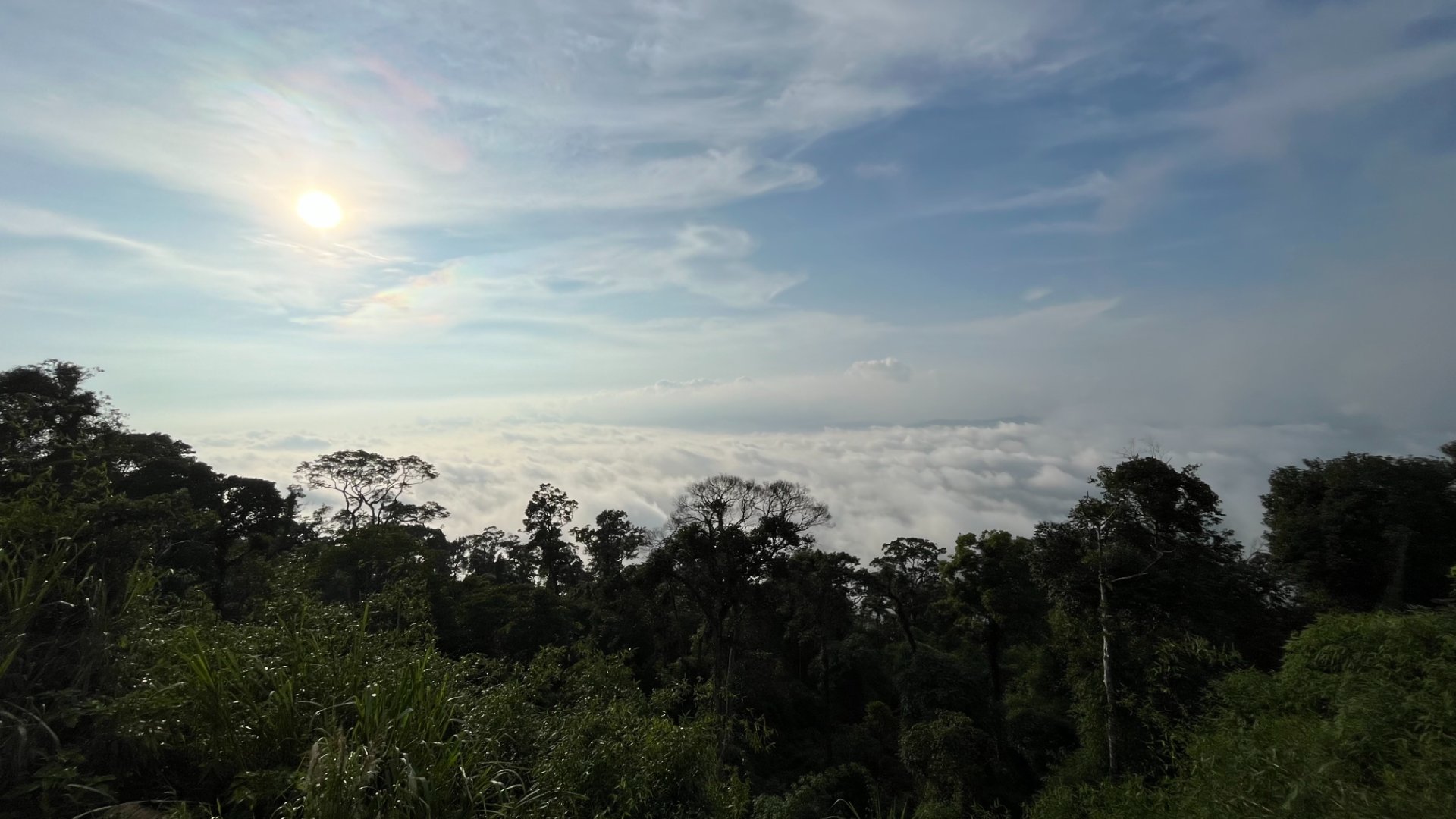 This is the highest viewpoint in the central region of Thailand and is at a higher elevation than Pha Diaw Dai. It is likewise part of Khao Khieaw, a sandstone mountain with an elevation of 4,233 feet or 1,290 meters above sea level. The weather is cool all year round and it is carpeted with mature forest, particularly species tolerant to cold such as Castanopsis or chinquapin, Dacridium, Podocarpus and Schima wallichii. The high humidity and dappled light through the trees encourage many kinds of orchids, ferns and lichens to grow on tree trunks and branches.

In the cool season, many birds migrate from Siberia and southern China to Khao Khieaw, such as the grey wagtail, Siberian thrush and silver oriole, making it a haven of biodiversity.

From this point the office and accommodations of Khao Yai National Park can be seen, as well as the town of Muak Lek in Saraburi province.

It is located 600 metres from the Pha Diaw Dai nature trail, at the 10km milepost by the entrance to the Royal Thai Air Force radar station. 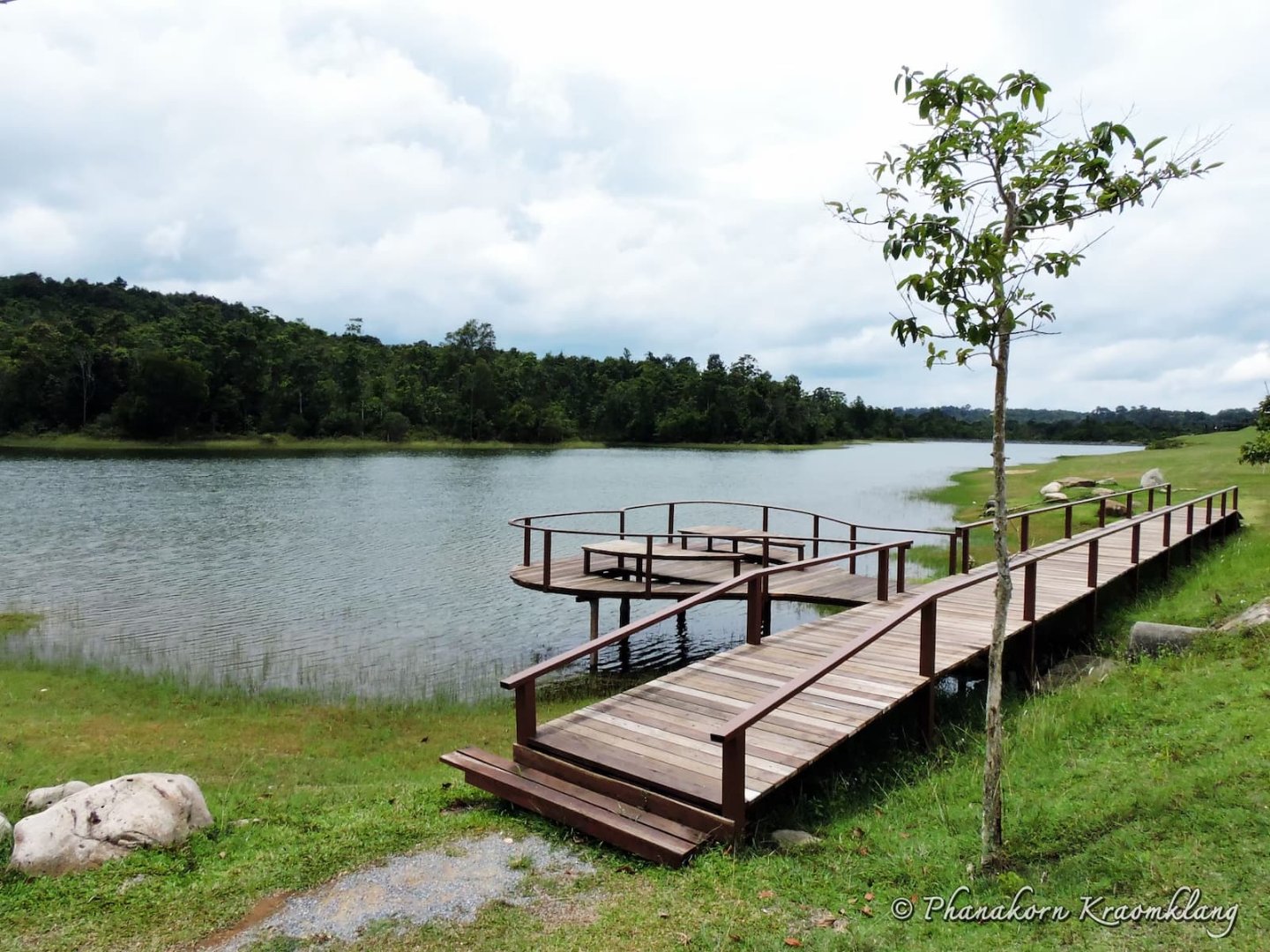 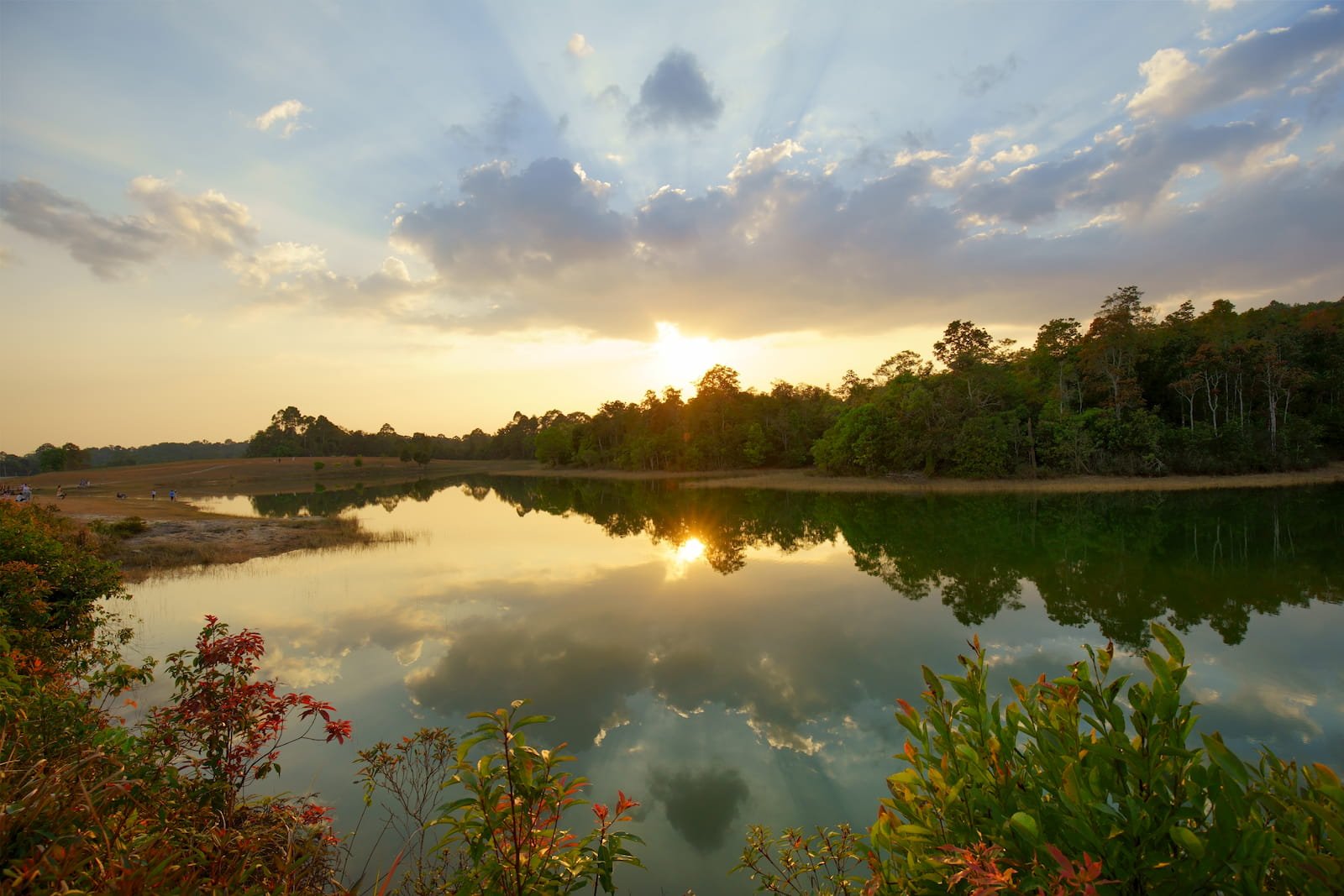 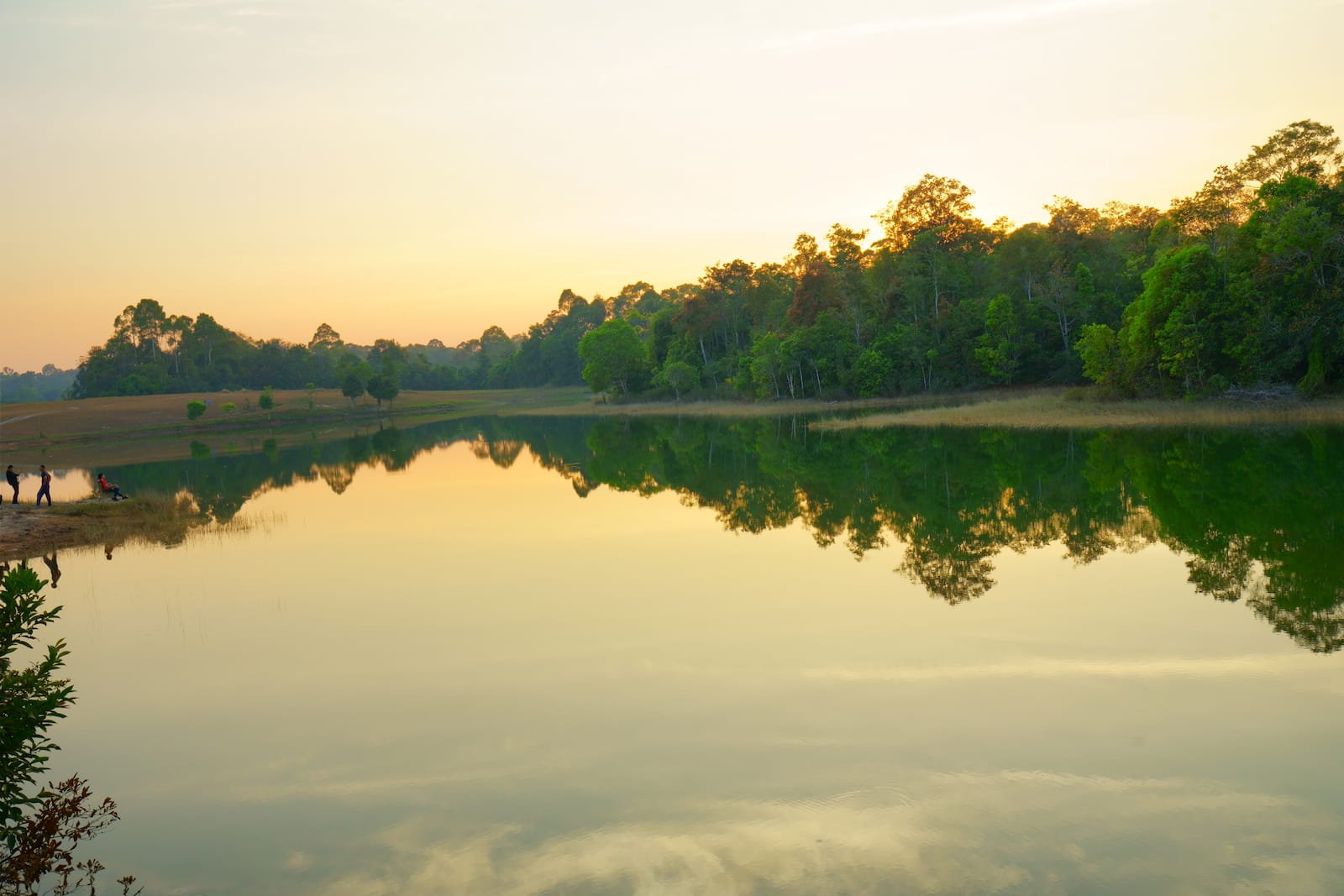 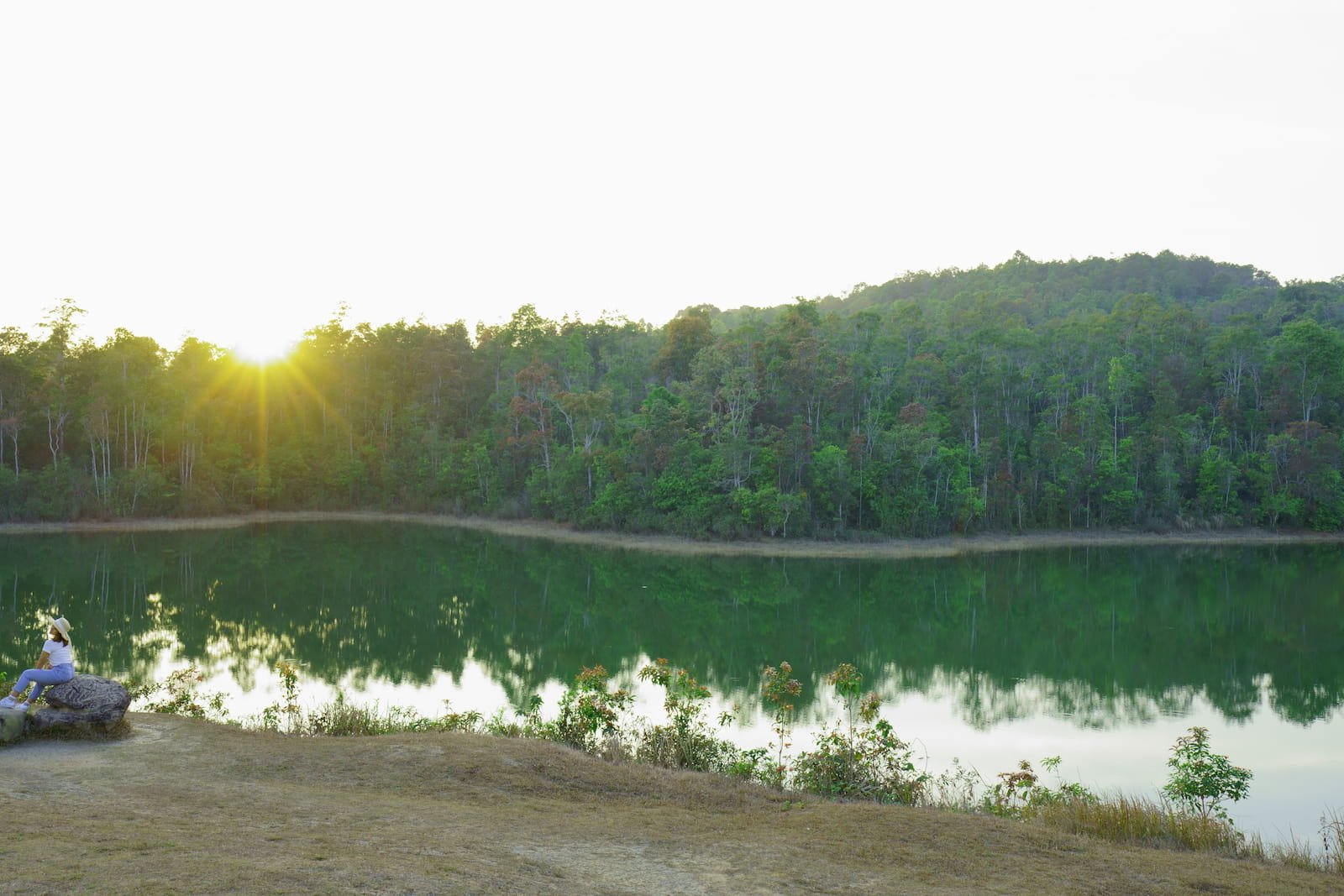 Khao Yai has an important water resource at its center, originally called Mor Sing To Reservoir after the mountain behind it, but subsequently renamed to Sai Sorn Reservoir, to honour Mr. Boonrueng Saisorn, the first chief of Khao Yai National Park. He was the original developer of the reservoir to provide potable water in Khao Yai National Park, and to be a source of water for wildlife.

Around the reservoir are beautiful views for relaxing, especially at the morning sunrise, when animals large and small come out to feed, from birds to monkeys and gibbons foraging for fruit in the trees, or barking deer, sambar deer and dhole. Visitors may be lucky enough to see wild elephants coming out to graze, enjoy salt licks or drinking water. In the water itself is a large variety of fish.

During the day, visitors can walk around the reservoir following a road through grasslands which are the result of agriculture by the villagers of Khao Yai. When the government moved them to lower altitudes, the plains which had been cleared became beautiful grassland, and the source of food for all kinds of wildlife. If you can wait and observe, even a herd of elephants may come foraging.

After sunset, the area is free of light pollution and the skies above the reservoir and grassland are full of stars which can be gazed at endlessly. 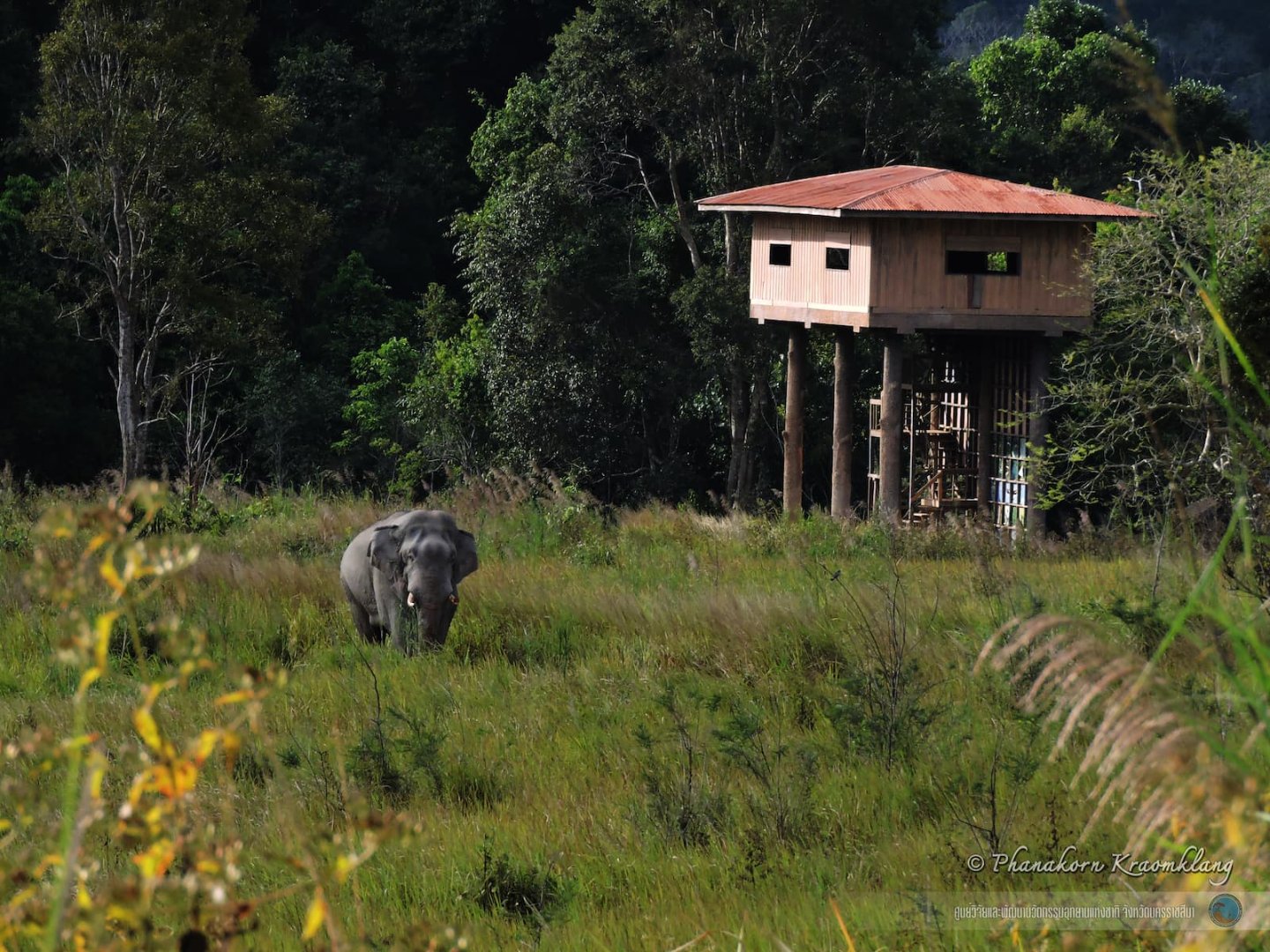 The Observation Tower is about 20 metres tall and located in the area of Nong Phak Chi, an important water source for wildlife. The open grassland is the sign of former agriculture, but today it is the site of artificial salt licks which provide nutrition to the wild animals, soil containing essential minerals for herbivores. Animals can be seen foraging from the Observation Tower. Commonly seen in Nong Phak Chi are sambar deer, barking deer, and wild boar. Other animals coming by less often include wild elephants, gaur and dhole.

It is located about 3 km from the Visitor Center. Cars are parked at the 35 km milestone on Thanarat Rd. Visitors must then proceed on foot over the grassland for another 1 km. 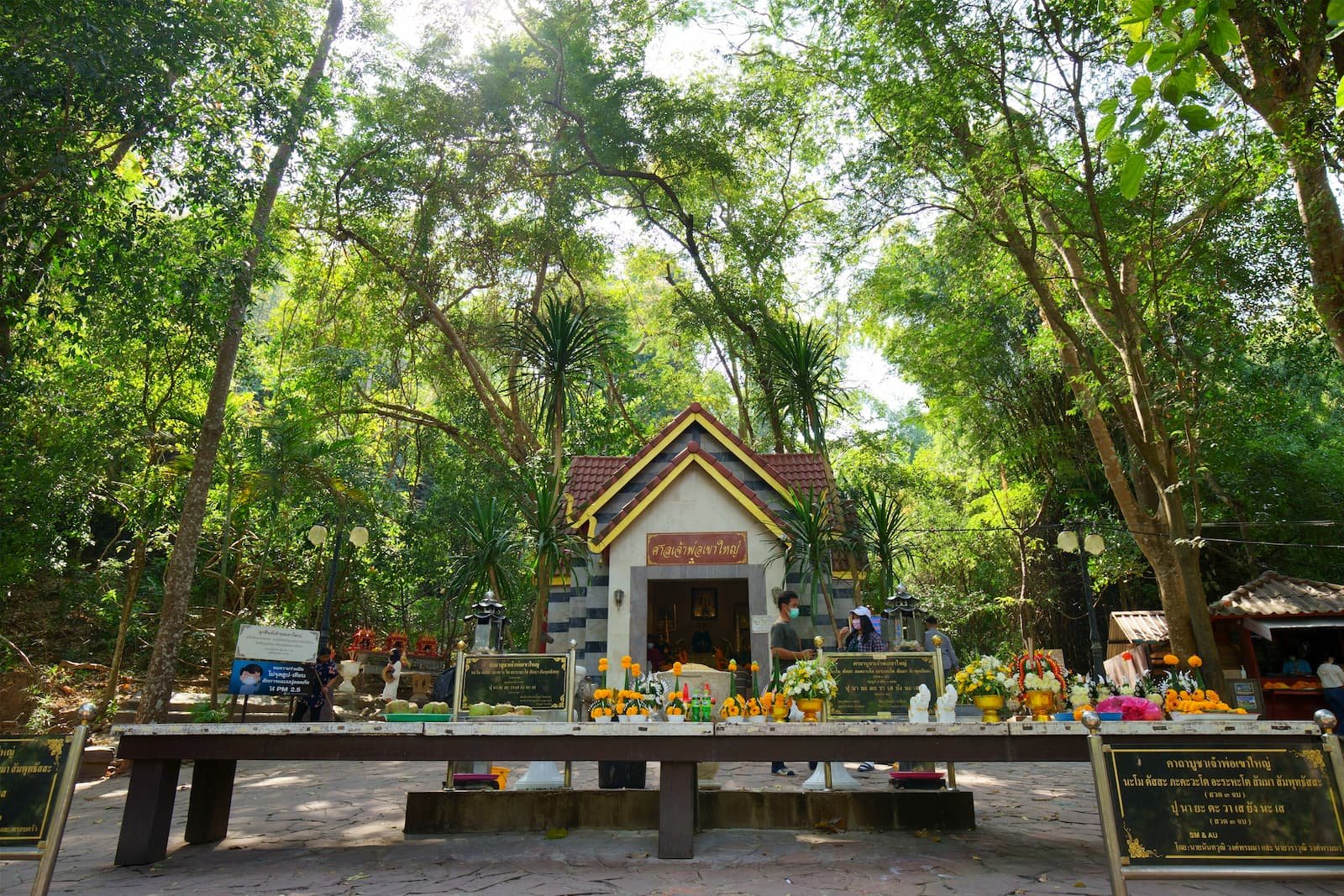 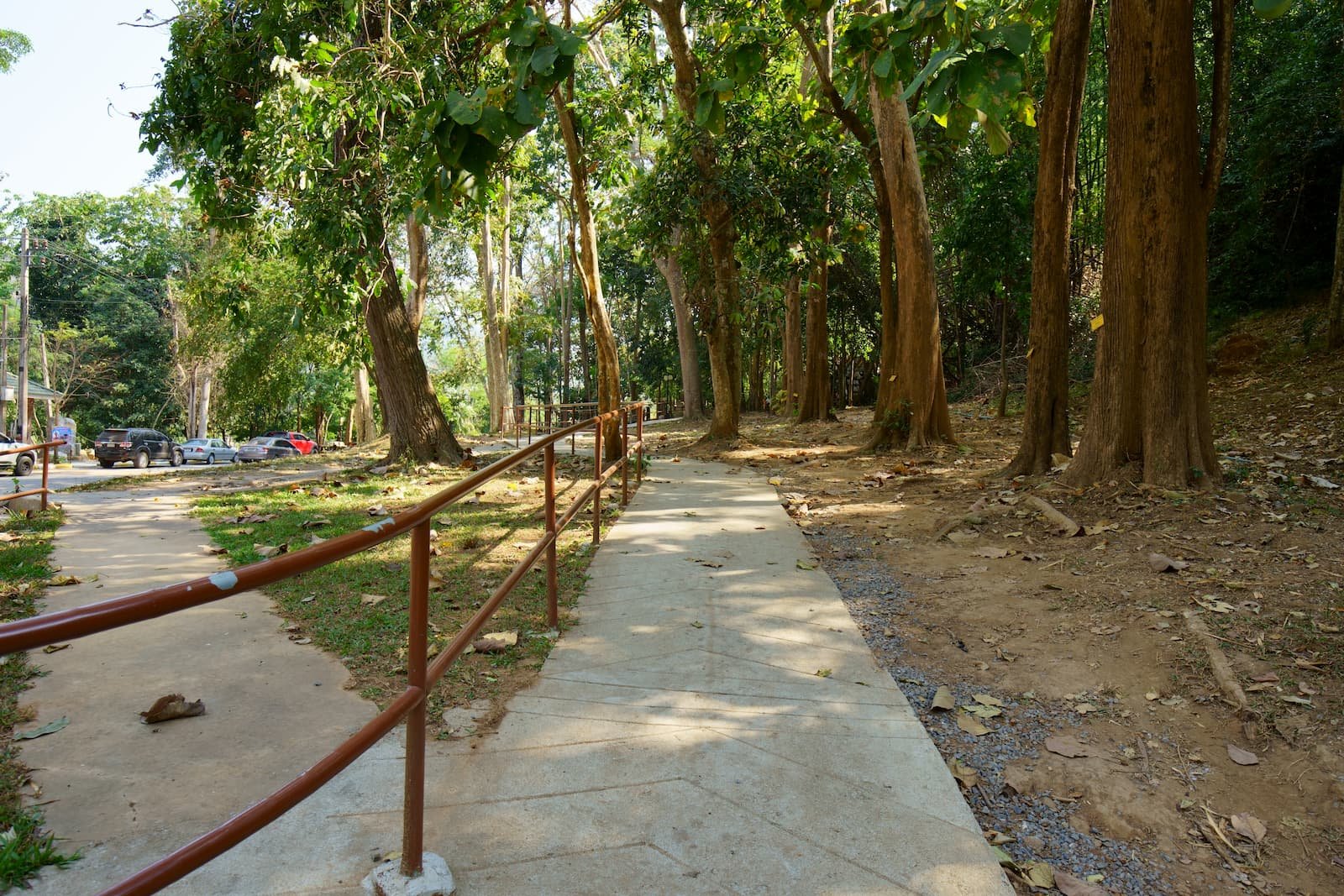 Chao Phor Khao Yai Shrine is an object of veneration for local people and those of the surrounding provinces. The original “Chao Phor Khao Yai” was Mr Jang Nisaisat, a native of Nakhon Nayok province, who served the government as a clerk of the Army. When he found out that some people under his command had turned to banditry on Khao Yai and had completely cleared the forest there, he was very sad. He thus requested these underlings to re-migrate back to the plains, but one group of bandits would not obey him, and a meeting was arranged. However, agreement could not be reached, there was a struggle and the bandit chief was shot dead.

At the time he was widely respected by local villagers for his generosity and kindness, often giving assistance to them in many ways. He died of malaria at the age of 75. Local villagers erected the Piang Ta Shrine in his memory underneath an Anisoptera tree at Wat Nong Khiam temple in Nakhon Nayok, which was known as the Palat Jang Shrine.

After conducting surveys to establish Khao Yai National Park, Field Marshal Sarit Thanarat had a vision of this individual who had protected the animals and forest of Khao Yai. He thus ordered the establishment of the Chao Phor Khao Yai Shrine near the 23 km milepost on Thanarat Road, and invited his spirit to occupy the shrine, thereafter known as Chao Phor Khao Yai Shrine. On the 26th of January every year, ceremonies are held to remember and honour him.